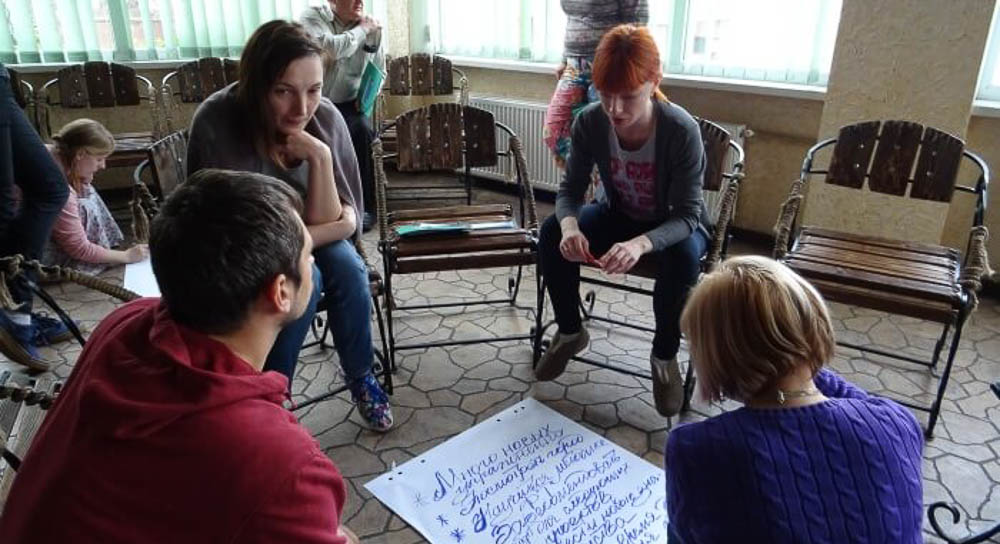 The ongoing conflict in Eastern Ukraine poses increasing challenges to Ukrainian society. In addition to the direct impact of the war in Eastern Ukraine – such as the rising number of dead and wounded, torture and displacement – the long-term consequences of the conflict are becoming increasingly visible.

The consequences of war: trauma, domestic violence and social tensions

A significant proportion of the Ukrainian population is being traumatised through direct or indirect contact with the events of the war. There is increasing evidence of domestic violence, extending across all social levels. Social tensions are arising between internally displaced persons and the local host communities; war returnees need to be reintegrated into society. The fact that much of the Ukrainian population is being affected directly or indirectly by the conflict is giving rise to new social tensions. Internally displaced persons as well as those involved in the war and their family members are increasingly experiencing discrimination. These consequences of the military conflict in Eastern Ukraine pose the risk of manifold potential for new conflict.

Civil society in Ukraine is currently the central social driving force endeavouring to effectively counter these many problems and conflicts. NGOs, initiatives and activists are providing the support which is so desperately needed for those affected by war and violence. They are the ones distributing humanitarian aid, evacuating people from the war zone, helping internally displaced persons in the search for housing and jobs and initiating dialogue to resolve the social conflicts mentioned above. The trauma therapy services offered free of charge to the population are attributable to the voluntary commitment of psychologists, although not all of them possess the urgently needed training. As a result of the continuing strain on civil society over the last two years, there is also evidence of an increasing risk of burn-out which, among other factors, has unfortunately led to a significant reduction in the level of voluntary commitment.

These problems, which are a highly topical issue in Ukraine, can also be found in other current or former conflict areas in the region. Civil society organisations in South and North Caucasus (e.g. Georgia and Armenia, countries of our project partners) are familiar with the problems and social tensions resulting from the lack of integration of internally displaced persons and refugees or with war-related domestic violence. These countries have developed their own effective approaches, as Ukraine has since done, and therefore have specific experience and expertise in post-conflict rehabilitation.

The project Overcoming the consequences of war together is primarily aimed at supporting Ukrainian civil society in tackling the social conflicts resulting from the war in Eastern Ukraine. Using expertise and experience from other Eastern European (post)war zones, we are providing actors in civil society with targeted professional training in conflict transformation and dialogue facilitation.

Transfer of knowledge and experience

Through the mutual exchange of experience and technical expertise with the civil societies in Georgia, Armenia and the Russian North Caucasus, we are also supporting local post-conflict rehabilitation and peacebuilding in these regions and have set up a network for this purpose. By bringing together the civil society actors involved in conflict transformation and peacebuilding in Eastern European (post-)conflict regions, this network enables the joint identification of better solutions and promotes the long-term peace process throughout the region.

The project is being carried out by the German-Russian Exchange (DRA) in cooperation with the Ukrainian NGO Country of Free People (Kraina Vilnih Ludej) and six other partners from Georgia, Armenia, Russian, Ukraine and Germany.

Core elements of our project

The project Overcoming the consequences of war together is being carried out by the German-Russian Exchange (DRA) in cooperation with the Ukrainian organisation Country of Free People (Kraina vilnih ludej) based in Kramatorsk and Lviv. We are also working together with the following partner organisations: “Our Future” in Zaporizhia (Ukraine), “Caritas Armenia” in Gyumri (Armenia), the “Sukhumi” foundation in Kutaisi (Georgia), the “East Europe Foundation” in Kyiv (Ukraine) and “ChildFund Deutschland” in Germany.

We are working on specific topics with the “Zentrum ÜBERLEBEN” (Centre “Survive”, formerly “Treatment Centre for Victims of Torture”), “Perspektivwechsel Plus” in Berlin and the Berlin Institute for Conflict Transformation and Dialogue “re-flow”.

The DRA set up this project to continue the peacebuilding and conflict rehabilitation work which we began in Ukraine in 2014. These activities are being continually developed in cooperation with our multinational network of partners.

The project is being funded by the Federal Foreign Office of the Federal Republic of Germany.